Hernando County’s multi-part plan to boost local waterways through artificial reef projects kicked off last month when more than 600 tons of concrete material were dumped into the Gulf of Mexico atop the existing Bendickson Reef.

On Sunday, the second part of the project — involving reef balls, or man-made concrete structures used to repair ailing reefs and promote healthy habitats for fish — got moving, too, much of it with the help of some unlikely volunteers.

Seventeen youth ages 12 to 18 from SCUBAnauts, a local marine science education program founded in 2001, gathered in Hernando Beach to create four reef balls to be dropped into the gulf next month.

County Commissioner Wayne Dukes says the structures will find their resting place in shallow waters, creating a reef fit for recreational activities, like fishing, snorkeling and diving, to help the county to live up to its newly adopted “Adventure Coast” slogan.

He says data from the state shows an $8 dollar return on every dollar spent on artificial reefs, resulting from increases in commercial and recreational water activities supported by the expansions.

“This is going to bring a lot more recreational opportunities to Hernando County, and that is good for the quality of life of our residents and tourists,” he said.

Dukes tipped his hat to the SCUBAnauts volunteers, whose involvement in the county’s plans began months ago, when they were enlisted by county waterways manager Keith Kolasa to do standardized underwater surveys of proposed reef sites.

While waterway projects are mostly fueled by the county’s $14 million BP settlement from the 2010 Deepwater Horizon oil spill in the gulf, county officials say those dollars are still stretched tight and only available in increments over a 15-year payout period.

Without SCUBAnauts, the county would have had to hire scientists to survey the sites for information required to get project permits and move forward, while services from the group were free.

“I give them all the credit. … They have helped us tremendously through this whole process,” Dukes said. “Their volunteer services have saved us both time and revenue.”

SCUBAnauts president and CEO Paul Foisy said in his mind, the partnership helps his organization just as much as it has helped the county.

“This isn’t something your typical teenager does, and a lot of them don’t even realize the magnitude of what they are doing,” Foisy said, adding that the group also does regular survey work in the Florida Keys. “We are all about hands-on experience. … This is that.”

SCUBAnauts member Diana Phillips, 15, said the best part about helping communities like Hernando County with waterway projects is knowing how long-lasting her work will be.

“Us being kids and being able to make something that will last hundreds of years is a big deal,” Phillips said. “It’s good for our future and the community’s future at the same time.”

Much of the funding for Sunday’s project came from 19-year-old Cole Kolasa, son of Keith Kolasa and a longtime SCUBAnauts member who now attends the University of Central Florida. Over the summer, he kayaked from the Florida Panhandle to the Everglades while blogging and collecting donations for the county’s reef projects.

Kolasa raised about $3,200, which was used to purchase the four reef ball molds used by SCUBAnauts, as well as concrete and other materials.

Once the reef balls are dropped, Foisy said, the SCUBAnauts members will return regularly to monitor them. Kolasa, a sophomore marine biology major, said he will, too, and hopes to have the university study the sites and their effect on seawater in the area.

“It’s really exciting what is happening, especially because I grew up in Hernando County and now I am able to do research and actually be able to make a difference and see results,” he said. “I’m excited to see change actually happening.”

At the Monday night poster social come hear the latest from our surveys.
EP18_McFarlane_James


It will be at the American Fisheries Annual Meeting in Tampa, FL

You might want to talk to Professor Jennifer Mattei who’s project has shown great success.   Or just listen to this video

Read the article from Sacred Harts University at Living Shorelines are more than just a breakwater.  You want it to meet the needs of the people as well as a wide variety of organisms.   Think back to why we feel we need to do something.  The answer is simple in the developing world man has had a major impact.  No, many of the systems are over stressed and we need to find better ways to enjoy the water we love and have a viable healthy food source. There is some great research going on in the North East.   I hope you will take this information and build on it in your region.    We at Reef Innovations are happy to share successes and ideas for your project.   Horseshoe crabs and sea turtles also need access to the shoreline.   J.McFarlane 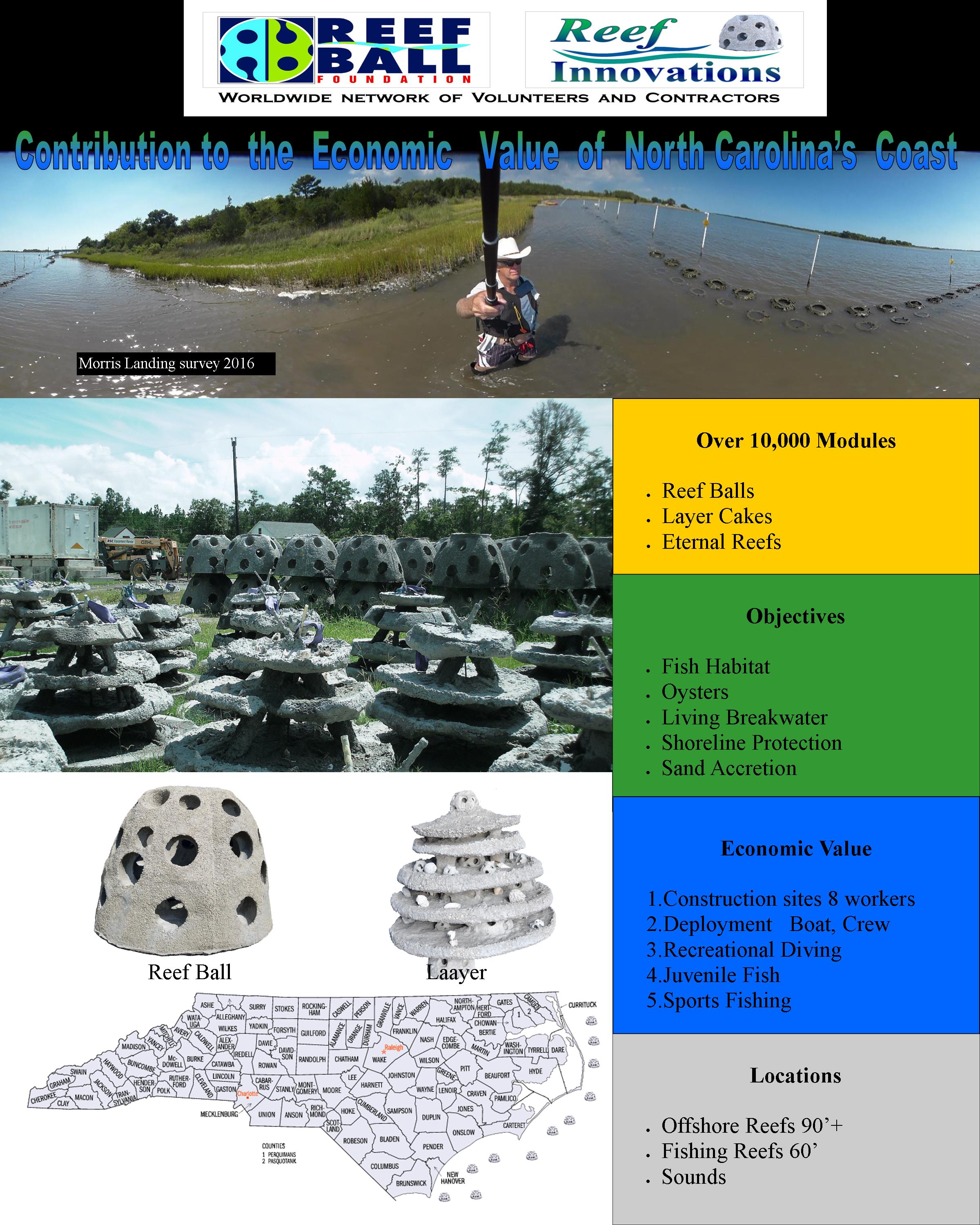 Over the past few years as I attended workshops on Blue Carbon, I have always suspected that Oysters may be a way to remove carbon.  Afterall their shell is calcium carbonate.  Attached is a link to an article that may make a good case for mover forward quickly in the re-establishing oyster populations in all our estuaries and definitely as part of a homeowner living shoreline project to replace or augment their seawall and dock.

“One of our projects, Morris Landing, seemed untouched by the hurricane; the sill structure looked as it did before and that’s the point of them,” Skrabal said, a coastal scientist with the federation.

The comparative studies or living shoreline treatments by The North Carolina Coastal Federation, shows the value of homeowners taking steps other than bulkheads to protect their shoreline from erosion during high energy events.

Prior to the hurricane I surveyed the site that consists of  rows of Reef Balls that have oysters growing on the.  The site also compares Shell Baggs,  A freestanding bulkhead, granite riprap, and loose oyster shell.

It was great hearing they didn’t have any loss of shoreline at this site during the storm.  A 360degree video of the Morris landing site is at http://www.reefinnovations.com/archives/4383

Third in a multi-part series

HOLLY RIDGE – When Hurricane Matthew approached North Carolina in October, many in the state – from scientists to casual observers – watched to see the effects on shorelines. Storm surge and increased wave action can visibly wear away the coast. How would properties with bulkheads fare? Or, for those with wetlands conservation in mind, would living shorelines deliver what they promised?

Living shorelines are designed to protect vulnerable marsh habitats. In the case of hurricanes, though, living shorelines are also meant to be filters of stormwater runoff and to mitigate the erosion caused by the water that inevitably comes with the storms. Larry Jansen chose his home in Holly Ridge’s Preserve at Morris Landing in part because of water and coastal access. As a volunteer with the North Carolina Coastal Federation, he’s been watching the 310-foot living shoreline completed there in July as the fifth phase of an ongoing restoration project, and he returned to the site soon after the hurricane passed through.

“I couldn’t really see any impact at all,” Jansen said.

“For the most part, these shorelines are behaving exactly the way we expect them to,” said Tracy Skrabal, a coastal scientist with the federation.

Living shorelines are generally made with a permeable sill, such as bagged oyster shells or rock, that follows the natural slope of the land, with marsh grasses and other wetland plants behind.

“When the water rushes up, there’s nothing impeding the flow,” Skrabal said. So, they are designed for the water to come in and go back out.

Although these observations are a good sign, there is more meticulous work being done in the aftermath of the hurricane. Carter Smith is a doctoral student at the University of North Carolina – Chapel Hill Institute of Marine Sciences in Morehead City.

“It started about a year and a half ago, with the goal of comparing how bulkheads, living shorelines and natural shorelines perform in major storm events,” Smith said of the research.

In the weeks since the hurricane, Smith has visited the project’s 30 study sites from Southport to Manteo.

At each, there are comparable shoreline structures that will face similar storm surge and wave energy. For the purposes of the study, living shorelines are those that have had some type of restoration work, such as the addition of marsh sills and aquatic plantings, and natural shorelines are unmodified. Both are compared to the hardened bulkhead type structures that are common along the coast. In the coming months, Smith will work on assessing the post-storm effects. Right now, though, she has made some preliminary findings.

“For the living shorelines, I would say there are no detectable instances of damage,” Smith said. For natural shorelines, there was measurable marsh erosion. “In some cases, a loss of over five meters (about 16.4 feet) from last year.”

Some bulkheads remained intact, but there are some stretches where bulkheads were damaged. Hardened structures such as bulkheads can fail in a number of ways during storms and the damage is often obvious.

“What we see is that the vertical surface of bulkheads is more susceptible to high-energy events,” Skrabal said. “And storm waves can scour away what’s in front of them.”

The same can happen behind the bulkhead, when saltwater overlaps the structure and weakens it, causing structural damage or collapse.

“I would say that at least 50 percent of the bulkheads we surveyed were damaged, from minor damage to full-on collapse,” Smith said.

A post-storm assessment is also expected to be released by the Division of Coastal Management, analyzing how sills, marshes and bulkheads fared during the storm.

For years, coastal conservationists have been championing living shorelines for protection of marsh habitat. “When you look at bulkheads, they ecologically bisect the habitat,” Skrabal said. “Marsh needs sediment, and they (bulkheads) tend to starve them of that with erosion and wave energy.”

Conservationists also have been encouraging property owners to consider living shorelines for better, more sustainable protection of their property. But bulkheads are by far the most popular choice for property owners. A previous study from the Institute of Marine Sciences estimates that as much as 9 to 16 percent of the coast is protected with bulkheads, and permits for bulkheads are easier to obtain. Whereas, it can be more difficult, months-long process to get permits needed to install a living shoreline. Bulkheads are more expensive, though, and can cost thousands of dollars, depending on the length of the shoreline.

“And the cost of repairing bulkheads after storms is considerable, too,” Skrabal said. It is her hope that the example of how well living shorelines did during the storm will convince more homeowners to consider them rather than repairing or replacing bulkheads.

“One of our projects, Morris Landing, seemed untouched by the hurricane; the sill structure looked as it did before and that’s the point of them,” Skrabal said.

This resiliency is something Erin Fleckenstein, a coastal scientist with the federation’s northeast office, has noticed, too. She cited a homeowner at Silver Lake Harbor on Ocracoke Island who had a living shoreline built there this past summer.

“Before, they were facing considerable erosion, mostly due to ferry traffic,” Fleckenstein said. But the owner reached out to Fleckenstein after the hurricane and made a point of saying how pleased they were with the erosion control and how well the shoreline did.

Larry returned from the International Conference on Shellfish Restoration (ICSR)  just in time to jump on the barge and head offshore for the deployment of Reef Balls on M8.

This month Jim surveyed the Audubon project designed as a living breakwater at Bird Island located in Tampa Bay off the Alafia River.

During this study I collected some 360 degree video above and below the water.  I continue to attempt to establish a protocol for scientific surveys using 360 degree