First you place the Reef Balls,

then return and plant marsh grass. 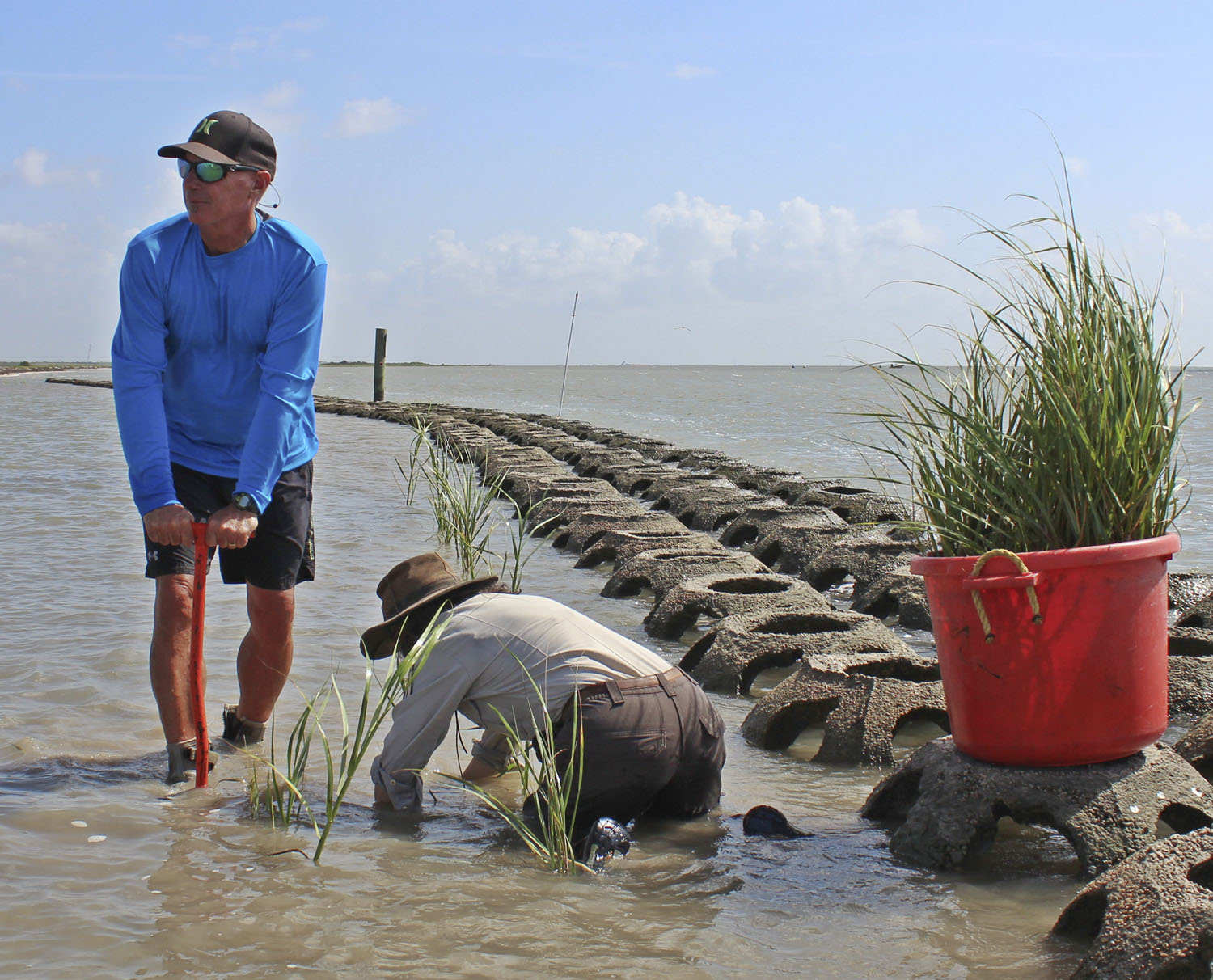 Shoreline degradation is an ongoing issue that challenges coastal habitat up and down the Texas coast. Shoreline degradation is the result of many issues, some manmade and others natural. Manmade issues include development, the creation of channels through sensitive marsh for commercial purposes, the Gulf Intracoastal Waterway (ICW), and others. Natural issues include consistent prevailing winds impacting shorelines, hurricanes, winter storms and other effects of Mother Nature.

CCA Texas’s Habitat Today for Fish Tomorrow (HTFT) program has taken part in several projects that were implemented to protect eroding shorelines, re-nourish shorelines and to prevent the breaching of one ecosystem into another. These projects include a joint effort with Ducks Unlimited Texas and others for shoreline protection along the ICW in the JD Murphree Wildlife Management Area and along the ICW just north of the San Bernard River where important fresh water marsh lakes were being threatened by salt water intrusion from the ICW. CCA Texas also worked with Ducks Unlimited and others in Cow Trap Lake (Brazoria County) where marsh shorelines where losing ground to the elements yearly. Other efforts included those with TPWD in Bird Island Cove in West Galveston Bay and Snake Island Cove with the Galveston Bay Foundation (GBF), also in West Galveston Bay.

The latest effort to help protect and restore shoreline degradation was recently completed on the far western end of West Galveston Bay along the Oyster Lake shoreline. This shoreline separates West Galveston Bay from Oyster Lake, a sensitive estuary lake accessible from the ICW and connecting creeks from Bastrop Bay. Over time, it is estimated that over 650 feet of shoreline has been lost on the West Galveston Bay side, and 150 feet on the Oyster Lake side since the 1940s due to prevailing wind, currents and hurricanes. Furthermore, the rate of erosion appeared to be accelerating, as since 1995, up to 175 feet of shoreline was lost on the West Bay side and 55 feet from Oyster Lake side. This project was a multi-phase undertaking that used different types of breakwaters designed specifically for shoreline protection and re-nourishment, and stretches across approximately 5,200 linear feet of critical habitat.

Phase I of the project placed 950 feet of shoreline breakwater along the West Galveston Bay and Oyster Lake shorelines. Another 500 linear feet of reef balls were place along the West Galveston Bay shoreline in a 3-wide configuration, and an additional 450 linear feet along the Oyster Lake shoreline in September 2013. The impacts of the breakwater were seen quickly and between September 2013 and June 2014 in the natural deposition of 1,100 cubic yards of material accumulating behind the breakwaters, thereby triggering the rebuilding process. In June 2014, volunteers planted more than 2,000 smooth cord grass sprigs covering .75 acres in the area between the existing shoreline and the breakwater on the West Galveston Bay side. This cord grass was provided by project partner NRG and, since the original planting, the grass has been spreading and filling in the entire planted area.

Phase II construction began in October 2015. This phase of the project utilized limestone riprap to form the breakwater. This breakwater was built in segmented fashion to allow water to flow freely in and out behind the breakwater and deposit materials that will eventually rebuild the shorelines. Phase II was completed in early January 2016 and 4,786 feet of breakwater that protects 5,150 feet of shoreline are now in place to protect Oyster Lake and the vital ecosystem services that it provides. The final steps in the project are to accomplish baseline data collection for annual monitoring and developing a grass planting strategy for the entire project.

Partnerships are crucial in completing projects such as these and CCA Texas is proud to have been a part of the project through the direct contribution of $200,000. This was important as it established groundwork for GBF to secure another $270,000 in matching dollars. These funds along with other funds from project partners bring together many groups in the common cause to help protect and restore vital coastal habitat along the Texas coast. Project partners included Galveston Bay Foundation, CCA Texas, Ducks Unlimited, NOAA, Texas General Land Office, Galveston Bay Estuary Program, Texas Commission on Environmental Quality, National Fish and Wildlife Foundation’s – Gulf Environmental Benefit Fund, and US Fish and Wildlife Service.

There aren't a lot of places for fish habitat off of the nature coast so the Hernando County Marine Program created artificial reefs. The reefs were put in the Gulf six months ago and are already drawing in lots of marine life.